By: Nyajah Williams “My whole mindset is to win” 12th grade Jeresha Barber stated as she spoke about her upcoming tennis game. A positive mindset and a whole lot of teamwork keeps her team pushing through. ”If I go out with the mindset to win, I won’t lose, I’m not worried about who I’m competing

By: Joseph Pepito The MSB Tennis Team displayed a fantastic game on Wed. Sep. 7 against McCluer.  They were full of ball and racket.  Before the game, I asked Jeresha Barber and Rukaya Williams a few questions regarding their status and skill.  I asked ,” How does teamwork play into Tennis and how will you

On September 4th, the Girls Tennis team won against Lutheran North. And this wasn’t just an average win, it was a win with only two players…TWO PLAYERS! The two players that showed up and showed out were senior Emani Irving and Rukaya Williams. They played 2 singles and one doubles match. Winning both, they not 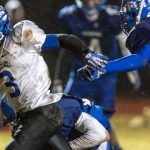 Multiple Teams · Nov 19 Welcome To The Home For Bulldog Sports

Fall sports are around the corner and this year the Bulldogs will feature an online presence that will cover our schools athletic programs like never before. Stay tuned for more details and exciting news!