Coming off a tough loss Wednesday against McCluer, Junior varsity volleyball players Shyann Samson and Antoinette Neal wouldn’t let that defeat them. Being asked how did they feel about the game, Samson said, “ I don’t take it hard but I am hard on myself and go over the mistakes I made” and Neal says, “After a loss I pick myself back up because I know me and my team will have a win”. These two volleyball players never let a lost defeat them. Both of the players set goals and changed their mindsets so the next game they can do a hundred times better. Both of the players want to improve to become a better player. They are continuing to grow. The players need support and involvement from their peers and students at school. “We always have a good attitude no matter what the outcome is, we have to stay determined.” said Shyann. Throughout the season the whole team is looking forward to taking home lots of wins and improving their skills. Playing McCuler, in the player’s opinion, wasn’t difficult. They are determined to win every time. 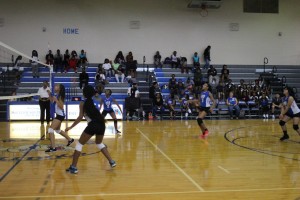 Taking this loss isn’t going to stop the team. They are going to keep going harder and growing each game. “Never give up” says Antoinette. Keep trying, strive for the best, never give up.